Ahoy me hearty! The search is on for buried treasure, but you’ll have to use your math skills to battle your way past pirates to reach the lost treasure.

A line of five pirates awaits you with cutlasses drawn on the screen. Each stands on a block with a number written on it, including decimal places. At the top of the screen, a clue tells you to pick out a number in a particular position – on the first level, that could be the tens position, ones, tenths or hundredths.

Click on the pirate with the matching number in that position and you’ll defeat him, click on the wrong pirate and he’ll parry your blow and give you a cut in return! Three cuts and it’s game over!

You’re up against a timer as you battle through the pirates and when the time runs out you move on to the next level if you’ve answered enough questions right. Each level adds longer numbers, but also takes you closer to that buried treasure. Some of the bigger numbers make this a challenge worthy of a young pirate in fifth grade!

Can you get all the way to the buried gold? 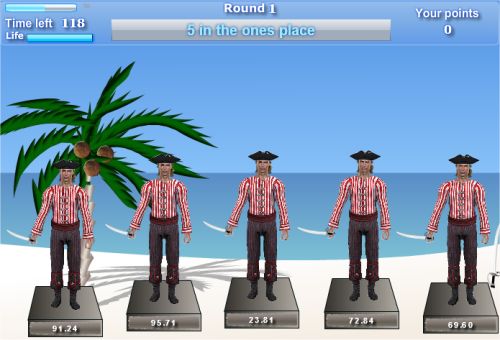